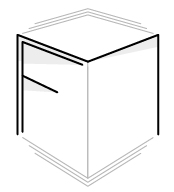 This game was made to be exposed in multiple location during late 2015, mainly in northern France.

I worked on this project during my first internship.

Enter in the arcade and help your mate beat the high score from Inside the Machine !

Inside the Machine is a cooperation game for two players. In this game the first player plays a seemingly classic arcade shoot’em up style of game, while the other player is inside the arcade machine. But, why is he in the arcade ? Well, the game is actually bugged quite a bit and the only way for the player one to play is to ask the second player to fix the bugs he sees. To do so, the second player have a large range of physic user interface to interact with, but he doesn’t have any other feedback on the effect of those interface, except for the first player.

So both players will need to communicate in order to have the best score and set the new record.

The outside part of the arcade is really classic, some on/off buttons, a 4 directions stick, a coin machine and a screen, the only new feature on it is the microphone added for players communication sake. The paint on it is also custom, made for the project. 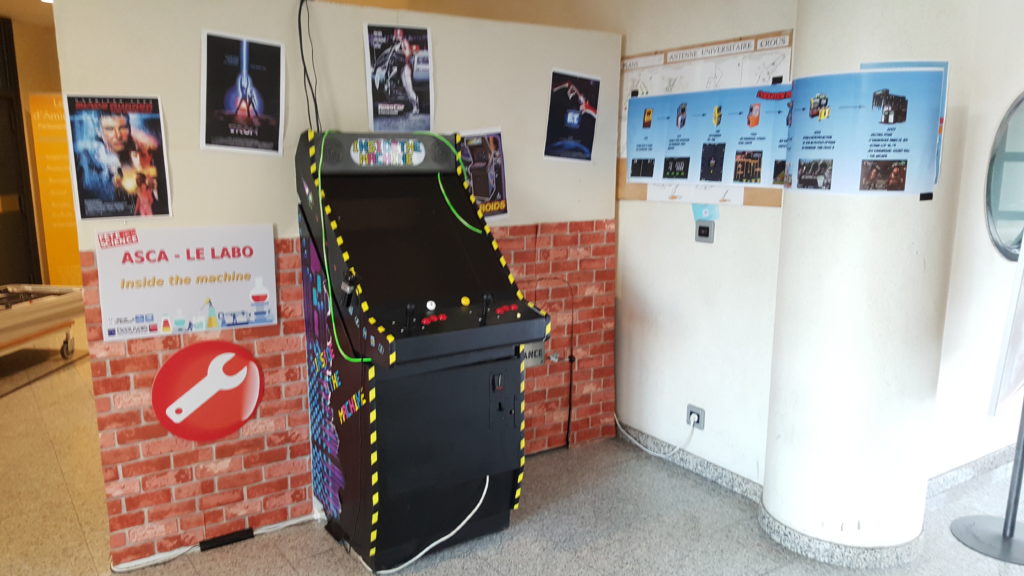 The arcade exposed in a university in Beauvais, France.

The inside on the other hand is way more complex, to access it you need to pass through a little door in a wall (a fake wall), behind this wall you have all you need to play !
Five midi controllers, which have all sorts of type of control, on/off switch, buttons, sliders, wheel, knot, etc. All those possible input are placed in a way to make three groups, each of those groups having different tag, the first is tagged graphics card, the second is sound card and the last is controller management. This is made for a better understanding of the possible source of a bug.
Plus, a speaker and a microphone for communication sake again. But, there is no display in the inside.

The inside of the arcade

The game is made of two different gameplay : The classic shooter gameplay and the inside the machine fixing bugs gameplay.

Movements, a simple 8 directions movement based system.
Shooting, the shooting system stay the same all the game, no power up.
Pattern based enemy, multiple enemy pattern, straight line, waves, etc…

Those mini-games are relatively simple (in term of complexity, not difficulty), for example, the displayed image can have some rgb color displacement, making the game way less readable (See example below), so the player inside need to find two sliders that correspond to the two axis of the rgb displacement. 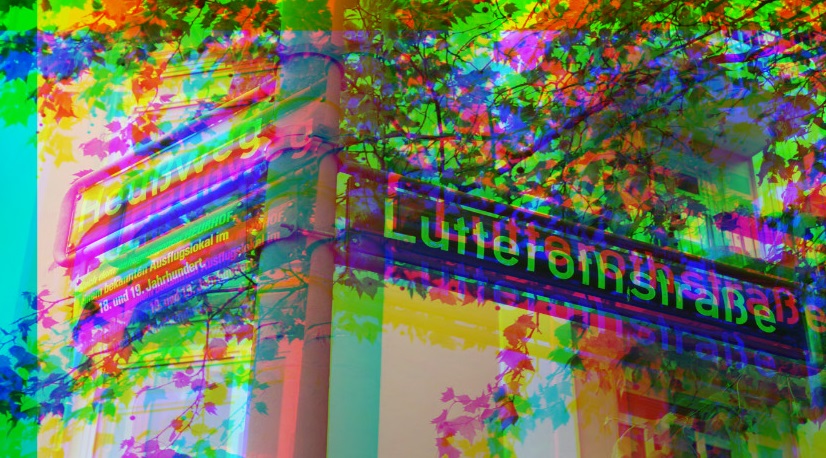 For the controller part, the player inside has no screen on which he can get visual feedback, all he has is all the buttons, sliders and other type of controller, and the speaker in which he can ear the player outside asking him to fix thing.

As I said above, each bugs have a mini-game link to it, achieving this mini-game bust the bug away.

But, there is multiple types of bugs, graphical, those only change the aspect of the game, sound based, this type only affect the sound coming from the game and control bugs, which change how the game controls works.

Regarding the mini-games, those have only one thing in common, they all need the two players to communicate, not only to inform the inside player of the existence of a bug, but also to update the inside players to know if what he is doing does anything at all.

We wanted the communication loop to be looking like that : 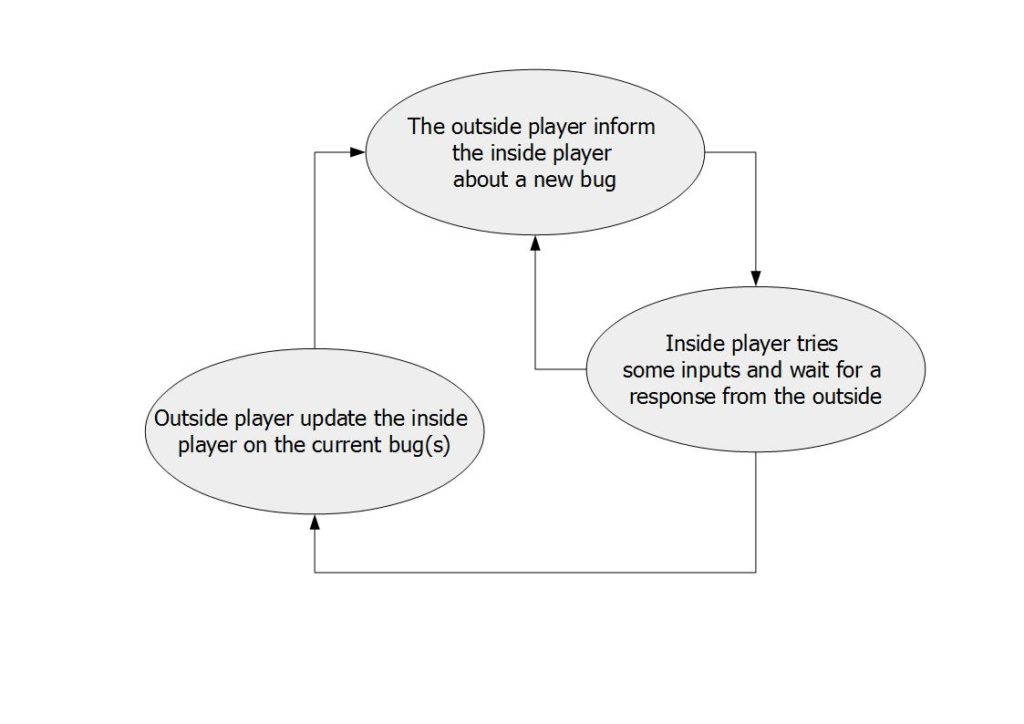 I worked as a game designer and a game developer on the inside part of the game. I also build the arcade with a colleague. 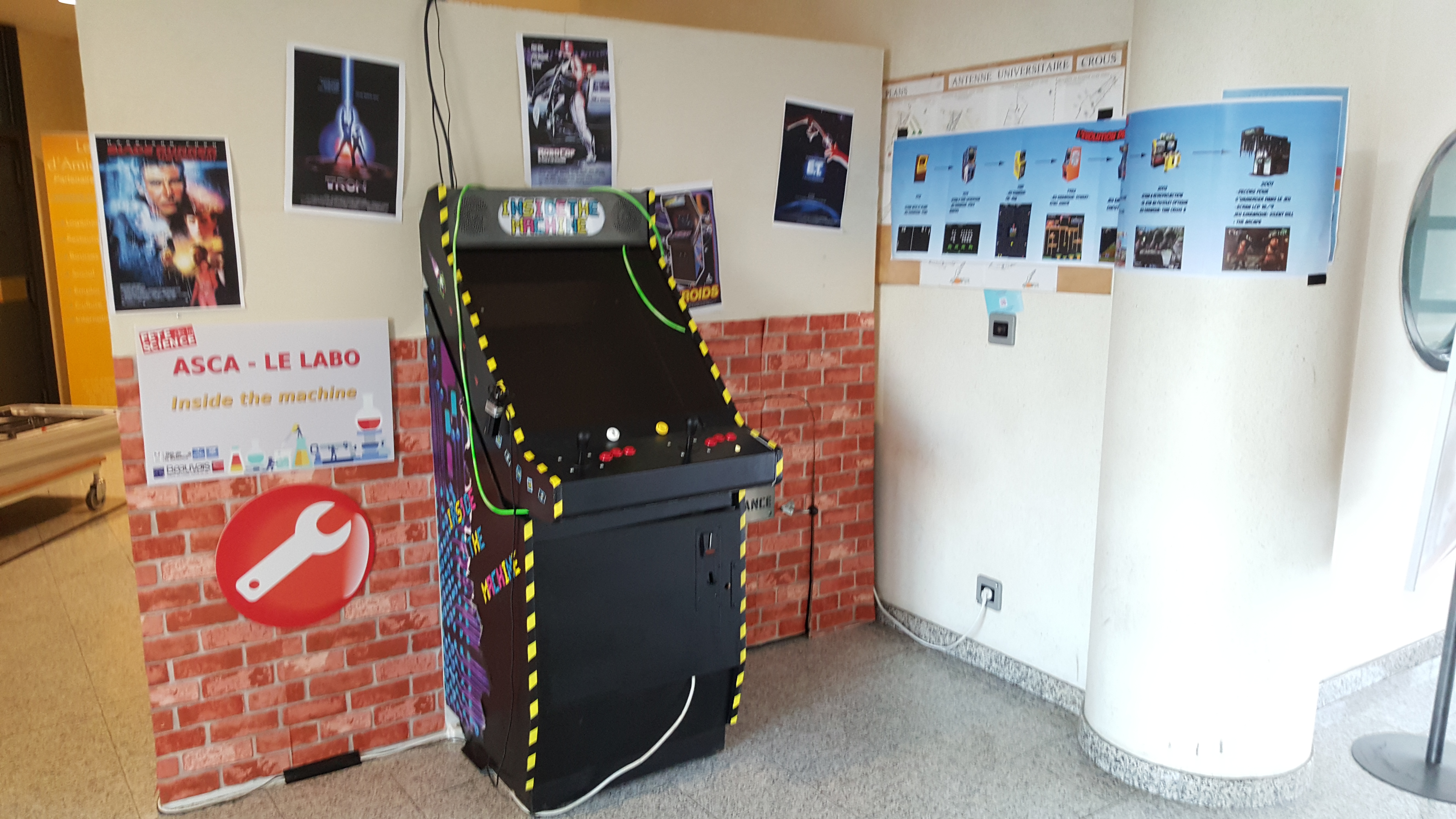 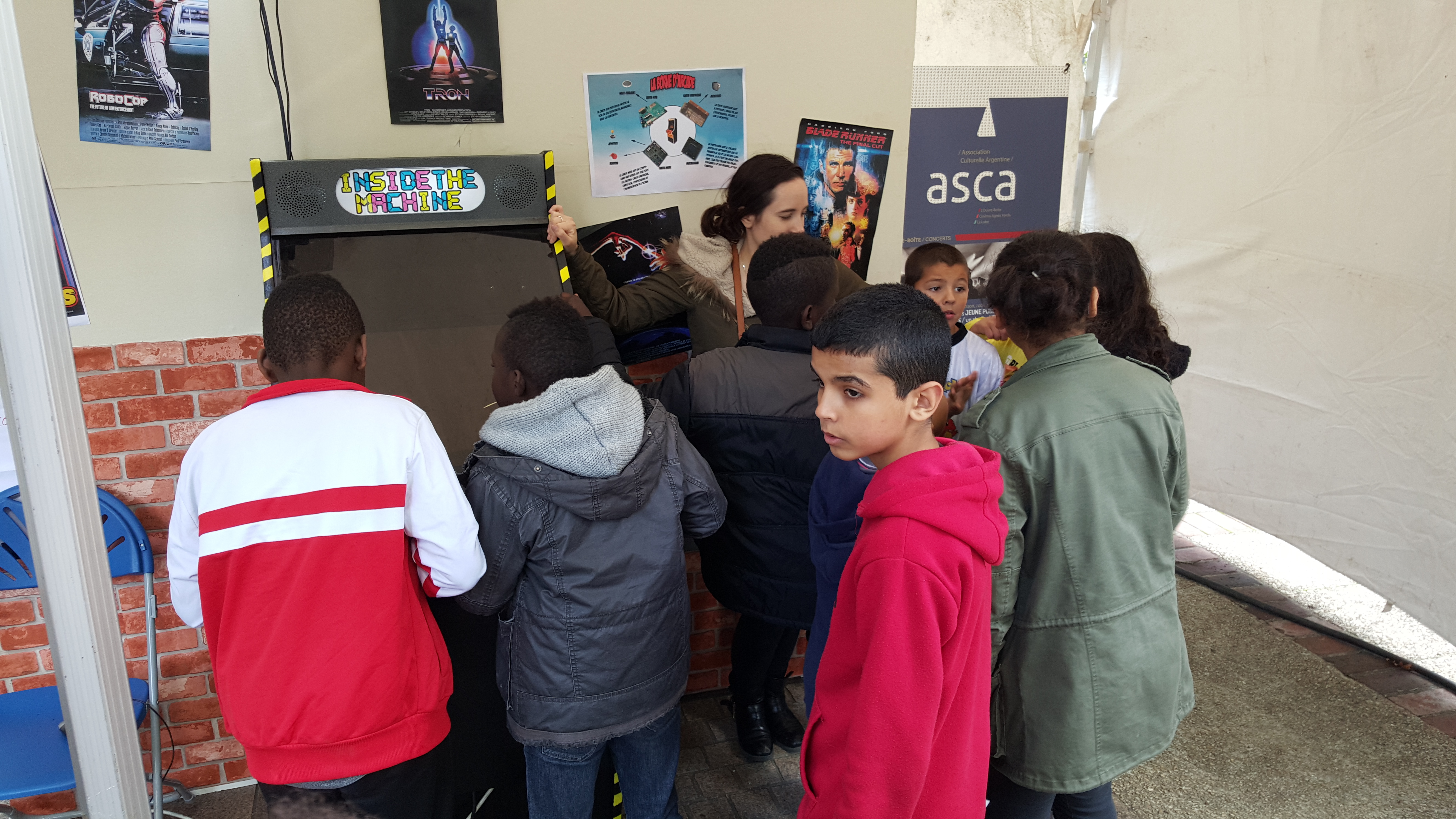 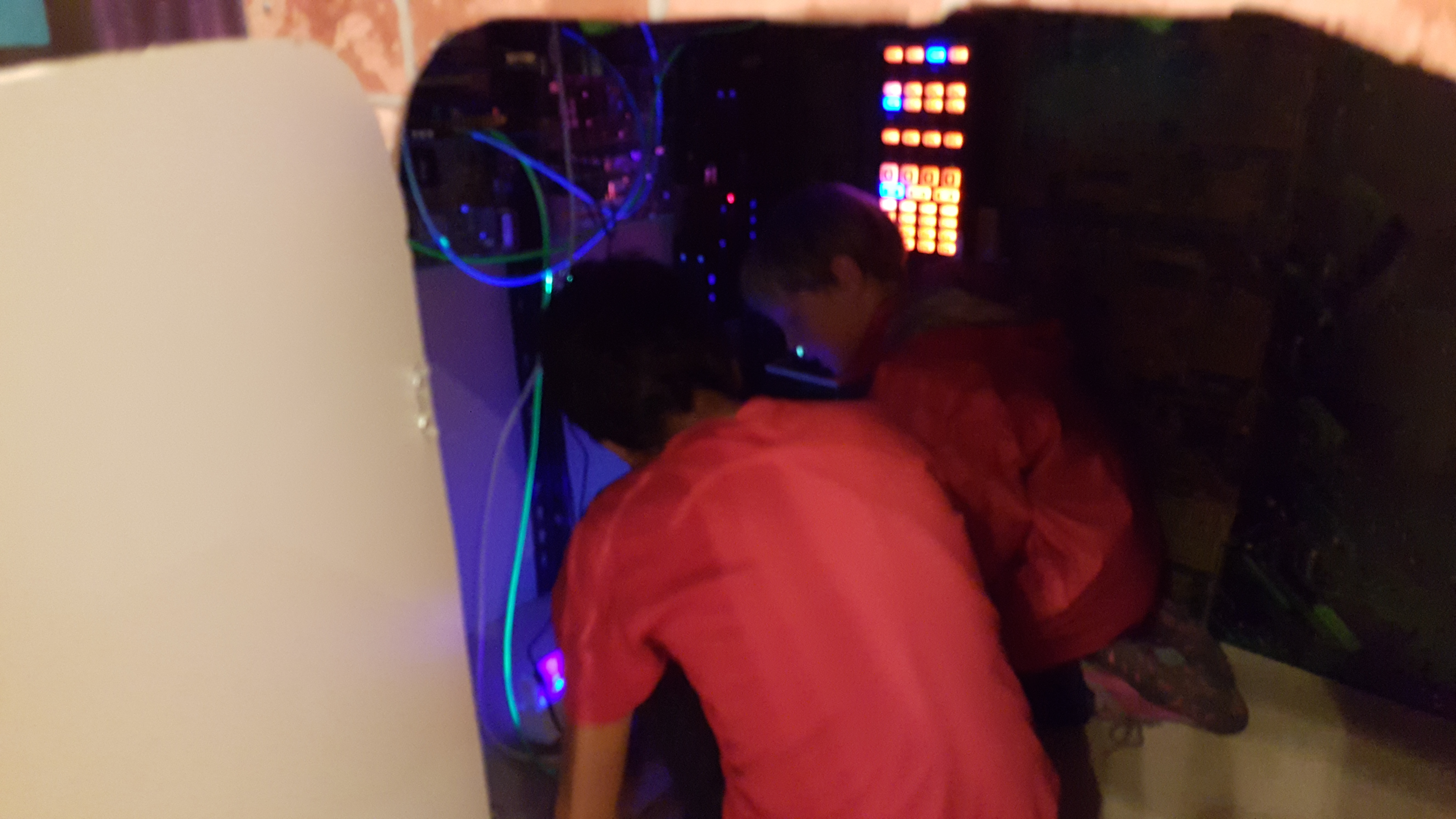 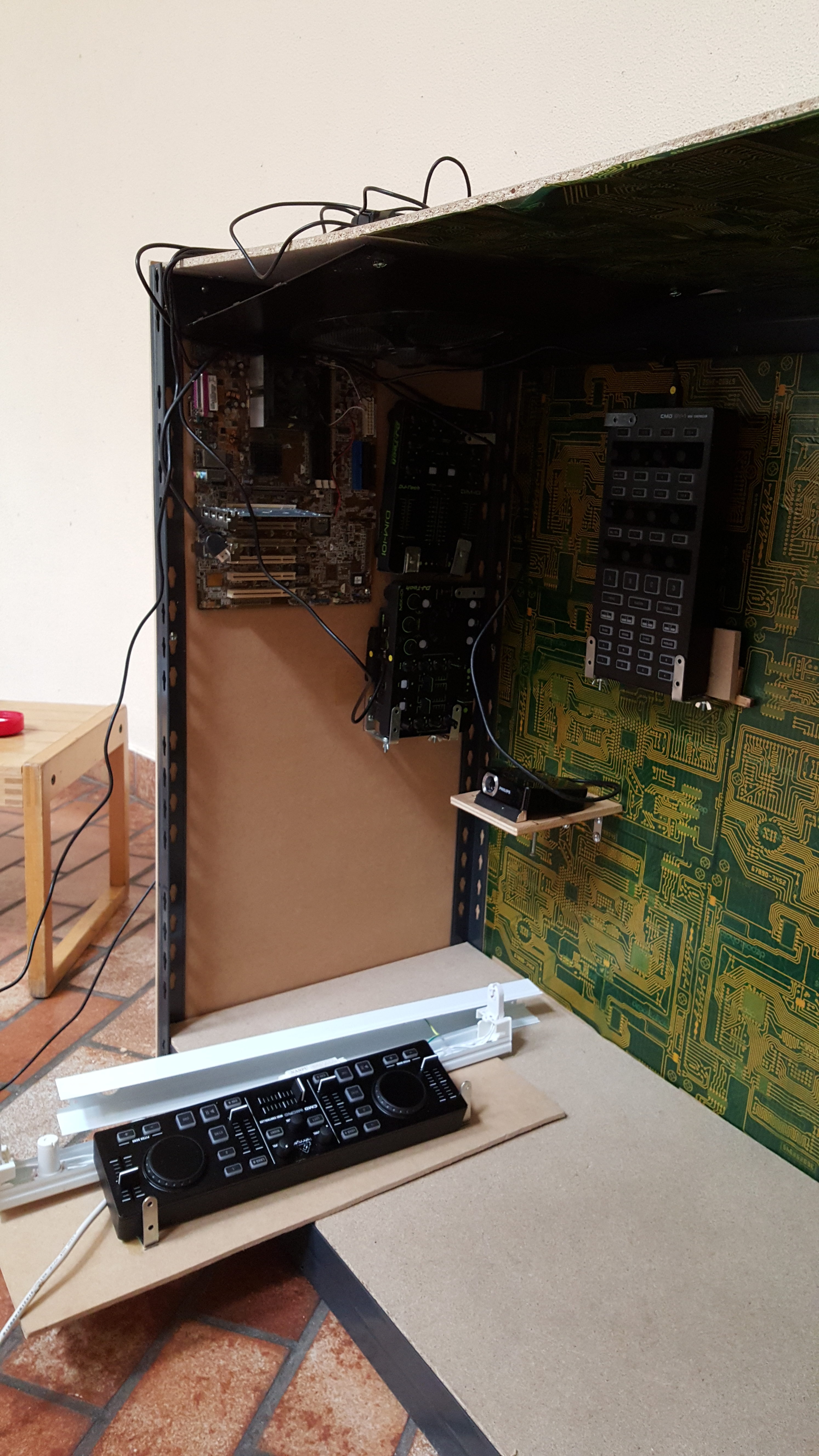 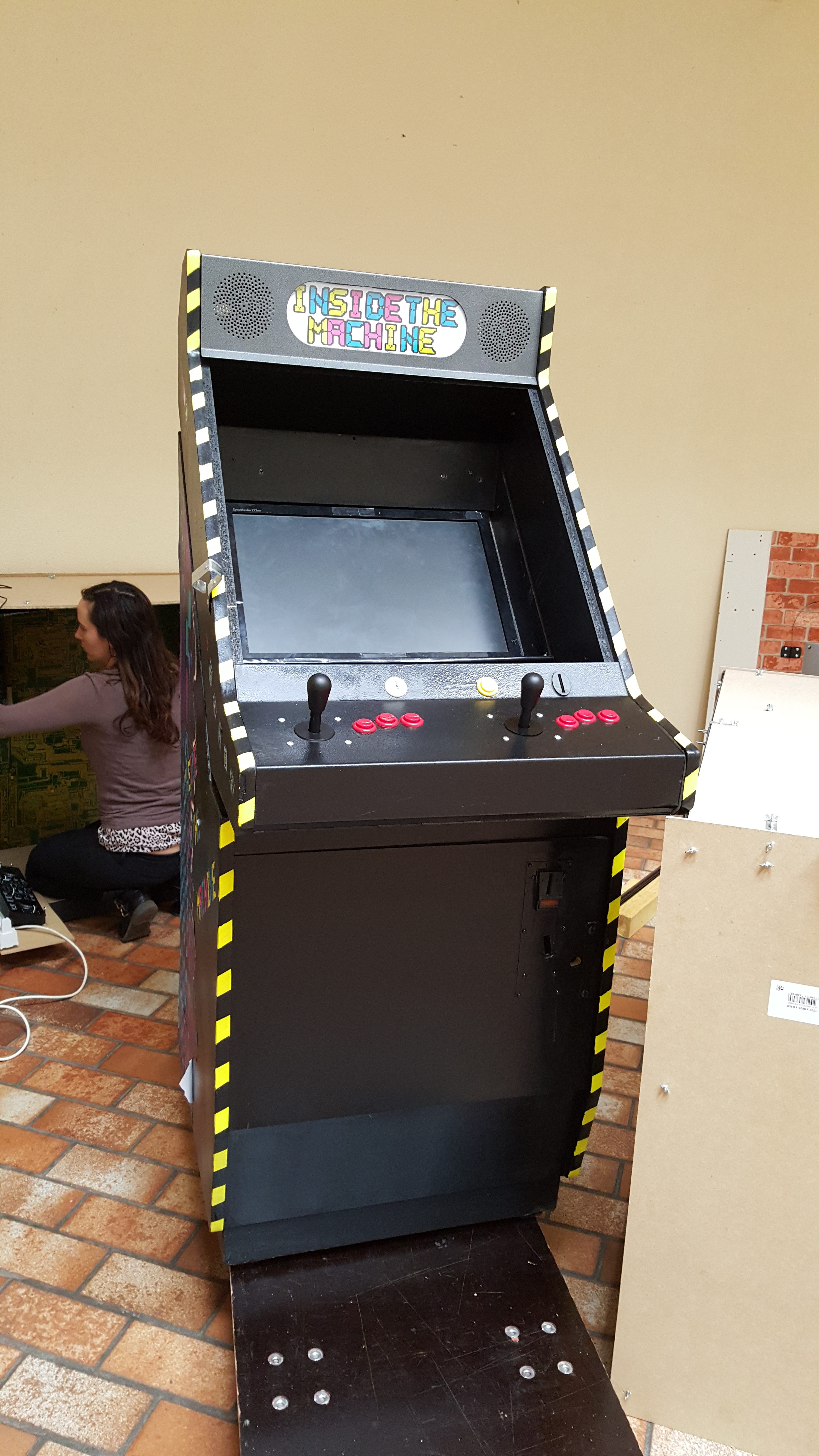